Aim
To provide opportunities for social learning from past proto-urban and urban contexts. More specifically, this sub frame will provide long-term perspectives on sustainable urban living and liveable landscapes in the making and persistence of the urban mind(s) of the Greek Bronze and Iron Age.

Benefit of achieved aim
Improved understanding of the dynamics of people-environment interactions in changing times from a time-depth perspective. The comprehensive assessment of cultural and social resilience during a period of one thousand years of fluctuating societal prosperity, will add value to discussions not only of the discontinuities over time, but also the continuities in the composition of urban minds over times of heightened economic and environmental stress.

Scope of study
This sub frame will focus on four cultural transitions characterized by marked societal change combined with environmental instability, fluctuation and/or variation. The examples will be drawn from the archaeology of the Greek mainland with emphasis on the central and southern parts and will fall out within four chronological time frames of two hundred years each: 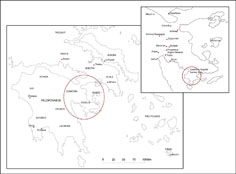 Map of mainland Greece with important sites and focus area for Urban Mind, Frame 2b, indicated. The focus area comprises many of the proto-urban and urban settlements which are central for Bronze Age studies today, and which were important social, political and economic nodes during all periods of the Bronze Age. Illustration: Erika Weiberg.