Past landscapes. An environmental sequence through isotope analys of speleothemes in southern Greece 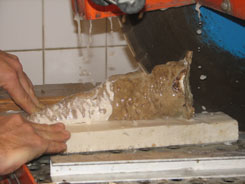 The purpose of the project is to study possible links between climate, environment and society during the Bronze Age of the southern Greek mainland.

Past and present climate

As a result of the climate changes facing the world today, the strategic environmental research has increased exponentially in recent decades. A sustainable community includes a variety of aspects of social, cultural, economic, biological and climatological nature. Analyses that try to incorporate all these aspects have increasingly come to realize that human resource management and ability to adapt to changing circumstances is expressed through cultural systems that change over time. This means that today we can learn from how past societies have dealt with changing conditions in the environment.

Isotope analyses of speleothems (it is especially the stalagmites that are investigated, i.e. the stones that form upward from the cave floors) provide a possibility to study changes in temperature and precipitation with high accuracy over time. In southern Greece, where the fascinating and complex societies arose very early, but where the dry climate creates problems of collecting environmental data, there are promising possibilities to apply the method.

The main purpose of this project is to establish an integrated climate-, environmental- and archaeological sequence of southern Greece during the last 10 000 years, with a focus on the Bronze Age (c. 3000-1000 BC). The project will be implemented in four steps:

Step 3. Establishment of a climatic sequence

Step 4. Analysis of potential connections man-society-climate-environment on a local and regional scale.

The project began with two trips to the Peloponnese in May and September 2009. During these trips a number of caves were examined, two of which were deemed suitable for further testing. Suitable caves must be deep and closed, protected from external interference, where the stalagmites can grow at a constant temperature and in constant and high humidity. The choice fell on a cave in the village of Kapsia, about 12 kilometers north of Tripolis in Arcadia, and a cave in Glyfada on the Mani Peninsula, the middle of the Peloponnese three "fingers". With the permission of the Authority for paleoantropologi and speleology of southern Greece stalagmites have now been sampled, and on the spot in the cave are stations that continuously record temperature and collect water.

Analyses of the samples are now ongoing as part of the PhD work conducted by Martin Finné at the Department of Physical Geography and Quaternary Geology, Stockholm University. The samples are dated by studying the rate of decay of uranium to thorium, and stable isotope analysis are used to obtain information about changes in temperature and precipitation during the time the speleothemes formed. These fundamental tests will lead to Step 3, which represents a valuation and interpretation of the results of the samples in order to establish a climate sequence that highlights any changes in climate in the region. When the outcome of this complex work undertaken by Martin Finné is starting to take shape, these will be placed in its historical context. This final evaluative work will in the final fourth step of the project mean close collaboration between all project participants to highlight all possible, regional and local linkages between climate and society for the periods covered by data from the sampled caves.

Our cooperation started within the recently completed trans-disciplinary project The Urban Mind. Cultural and Environmental Dynamics, for which the combination of humanities and natural science studies was an essential point. Inspiration for this project, as well as for Past Landscapes, has been and is how we can make the knowledge of the past relevant in our present, especially in relation to the changes in environment and climate we face today. Karin Holmgren and Martin Finné are also linked to the newly created Navarino Environmental Observatory (NEO). This research facility, located in the Gulf of Navarino in the western Peloponnese, is a Greek-Swedish cooperation with the aim of creating a platform for climate and environmental research in a Mediterranean environment. See and hear Karin Holmgren tell more about NEO and the analyses of speleothems!

The picture shows a view of the Argive plain, a region in the northeastern Peloponnese, the home of many o famous settlements from the Bronze Age on the Greek mainland, such as Mycenae, Tiryns and Lerna.