The project Short Stays is a survey project working in the Libyan Desert in Gilf Kebir and Uweinat looking at pre- and early Neolithic sites (as well as rock shelters, water stations, the odd hieroglyphic inscription, caravan tracks and so on in passing).

Surveying the desert sites on riverbanks where people had stopped for a short while to produce a tool or two only meets the eye. There were two kinds of sites: one where people had returned now an again to a stone block to produce a tool, and one where people stopped to work on material that you brought along. The waste on these sites fitted nicely together and the find situations is comparable to the results of controlled Stone Age experiments in lithic technology.

Equally impressing are the Neolithic sites with remains of a hut and what seems to have been a small agricultural area. Here there are one more or less intact round hut foundation signified by kerb stones, a quern and lithic waste, but also the remains of a number of number of hut foundations in less complete states of preservation indicating earlier visits to the site. Most of the lithic waste, however, was found in what seems to have been a field area.
Short Stays is a collaboration between Swedish and Egyptian researchers and still a very small project. 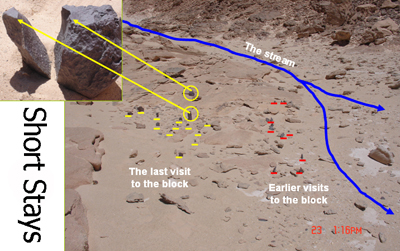