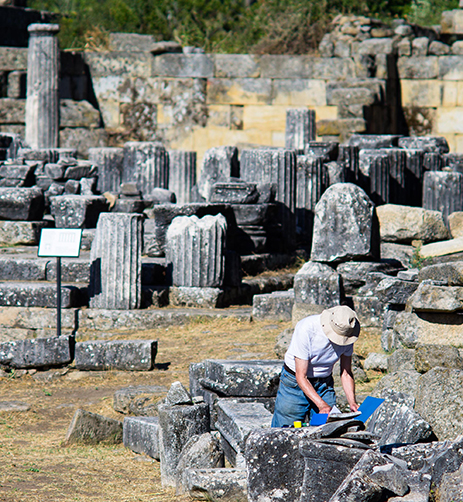 A short history of the excavations

The Swedish archaeological expedition to Labraunda in Karia is the largest Swedish research project undertaken in Turkey. Swedish archaeological excavations had started in both Greece and Italy in the 1920s and the Swedish (archaeological) institutes in Rome and Athens were founded in connection with these in 1926 and 1948, respectively (The Istanbul Research Institute opened in 1962). Earlier excavations in the Mediterranean, lead by Swedish archaeologists, but under the aegis of other foreign schools, were undertaken as early as 1894, on Poros and in Aphidna in Greece and in 1902 at Larisa-on-the-Hermos in Turkey. However, the 1920s signified a more coherent and enduring beginning for Swedish Mediterranean archaeology. The two most important persons behind this development were Axel W. Persson, from 1924 professor of Classical Archaeology at Uppsala University, and the Oxford archaeology student, also the Crown Prince of Sweden, Gustaf Adolf. With the collaboration of the Crown Prince, Axel W. Persson initiated several archaeological projects in Greece, beginning with Asine (1922-1930) and continuing with the necropolis at Dendra and the Valley of Berbati in the 1930s, and ending with the Mycenaean acropolis of Midea in 1939.

The second quarter of the 20th century was a productive period for Mediterranean archaeology, and especially with regard to the Aegean Bronze Age. The discovery of clay tablets with signs, called Linear A and B, at several sites such as Knossos, Mycenae and Pylos, engaged the scholars of the time. Axel W. Persson had become an experienced Bronze Age archaeologist, since the sites he excavated in Greece contained mainly Bronze Age layers. The decipherment of Linear B did not come until 1953, two years after Persson’s death, but up to that time scholars had been discussing the possibility that the Linear texts could be Karian or at least have a connection with the language of Karia. Also the prominent position that the double axe, ‘labrys’, took in Minoan culture on Krete suggested a connection with the Karian sanctuary of ‘Zeus with the double axe’ at Labraunda.

Axel W. Persson came to Karia in 1935, but as the region at that time was a military zone, the first Swedish application was turned down by the Turkish authorities. However, with the assistance of Gustaf Adolf, who during a visit to Turkey in 1934 had met with Atatürk, the Swedish team was given an “authorization exceptionelle” for Mylasa and its surroundings. After the initial test trenches in 1935, the team returned in 1938 and excavated at the small hill of Gencik Tepe in the field southeast of Milas, where Persson believed that Bronze Age layers appeared. Axel W. Persson wanted already then to start excavating the Karian Sanctuary of Zeus Labraundos, but the Second World War broke out the following year, making any work at Labraunda impossible. When the war ended, Persson received the excavation permit and in 1948 he and his team began their work at Labraunda. In a speech to the Royal Society of Humanities at Uppsala, he said: “Labraunda offers enormous possibilities for a clarification of the so far almost unknown Carian culture, and as I hope, also of its connection with the Minoan culture. This connection can be seen in the sphere of religion, but in the sphere of architecture it is still hypothetical. It will be one of our tasks to investigate more closely the question of such a connection. In spite of all other tempting sites in Caria, I do not hesitate to regard Labraunda as the most promising.” Persson lead three campaigns, in 1948, 1949 and 1950 (see the photographs after this introduction). During the preparation for the campaign of 1951, Persson fell ill and subsequently passed away. The Labraunda committee decided that the team should continue down to Labraunda, since everything had been arranged for the season. The campaigns of 1951 and 1953 were directed by Gösta Säflund, who in 1948 had become professor of Classical Archaeology at Stockholm University.

Because there was no obvious successor to Persson, the work at Labraunda was discontinued after 1953. During the 1950s Gustaf VI Adolf, now king, again intervened and assisted in gathering a Commission, which was to continue and supervise work at the site. A new director was nominated, Alfred Westholm, who had a wide archaeological experience especially from the Swedish Cyprus Expedition. In 1960 he lead a team back to Labraunda in order to finish the early excavations, with the aim to give the responsibility for the site back to the Turkish authorities.

The Labraunda publications and the new research

The first volume in the Labraunda series appeared in 1955. It was the architect Kristian Jeppesen’s publication of the two propylaia. A survey of the excavated site and its architecture was subsequently published by the new director Alfred Westholm in 1963. The 133 Greek inscriptions, which had been studied by Jonas Crampa since the excavations of Axel W. Persson, came out in two volumes in 1969 and 1972, the first volume as Crampa’s doctoral dissertation.
The classical and later pottery was the subject of a Lic. Phil. thesis of Pontus Hellström and was published in the series in 1965. It was Pontus Hellström who would later take over the directorship of the Labraunda project in 1979 and under his supervision five Labraunda volumes appeared: his own together with the architect Thomas Thieme on the Temple of Zeus (1982); Marie-Louise Säflund’s Stamped amphora handles (1980); J. J. Jully’s on the Archaic pottery (1981); Michael Meier-Brügger’s on Die karische Inschriften (1983); and Ann C. Gunter’s volume on the Marble sculpture (1995). Hellström and Thieme are now in the process of finishing a volume on the two andrones.

As Pontus Hellström had retired from his position as professor at Uppsala University, the Labraunda project was handed over to Lars Karlsson in 2004, who has been affiliated with Uppsala University since 2001. The new project at Labraunda started in 2003 and is divided into three study areas that were given very little attention in the early excavations. Understandably, the early excavators had concentrated on the marble buildings of the central sanctuary. The new studies emphasize the surroundings of the sanctuary and the little known Late Roman period: The project director Lars Karlsson is documenting and excavating the five free-standing towers and the ring-fort on the acropolis; Jesper Blid of Stockholm University is inventoring all of the remains of Late Roman and Byzantine buildings, as well as excavating in the two buildings discovered in 2007 and 2008, the Tetraconch and the West Church; Olivier Henry, from Bordeaux University and now at Institut Français d’Etudes Anatoliennes, is carrying out a complete documentation and excavation of the 80 tombs known around the site and along the Sacred Way, together with osteologist Anne Ingvarsson-Sundström of Uppsala University. The remains of the Sacred Way and the spring houses connected with it have been studied by Abdulkadir Baran of Muğla University. The new work at Labraunda will result in three new volumes: one on the ‘Forts and fortifications of Labraunda’, one on ‘Labraunda in Late Antiquity’ and finally a volume on ‘The necropoleis of Labraunda’, written by the three excavators responsible for the individual sites.

Labraunda’s contribution to history and the future of the excavations

Axel W. Persson had hoped to find the origins of, as well as the connection between, the Minoan and Karian cultures in the excavation of Labraunda. Although this lofty goal has yet to be achieved, the Swedish excavations have made significant contributions to the political, religious and architectural history of the area: the best preserved Hekatomnid architectural complex in Karia has been discovered.

(As was well stated by Simon Hornblower in Mausolus, Oxford 1982, 311f.: “At Labraunda (so numerous are the explicit dedications) there is for once no alternative to attributing the main ensemble to the Hekatomnids¬--more precisely to Mausolus and Idrieus. Their bold dedications, the logic of the plan of the hieron, and the marked paucity of hellenistic dedications (nothing, for instance, by Olympichos)--contrast the Roman period when building operations at the sanctuary revived--make it unnecessary to consider other candidates. This noble site, which possesses some of the numinousness of Delphi (an effect which the altitude, the silence, and the pines conspire to produce) is the finest certain and extant example of Hekatomnid planning. The preservation of Labraunda is consolation for the loss of the (anyway artistically dubious) Mausoleum at Halikarnassos.”)

Not less than seven buildings bear dedicatory inscriptions mentioning Maussollos or his brother Idrieus, thus anchoring these buildings to the middle of the 4th century B.C. The central cult area of Labraunda can now be experienced as a Hekatomnid sanctuary by the modern visitor. Through the 133 inscriptions (now 134), we have a wealth of information about the running of an ancient sanctuary, the organisation of sacred land, the relations between the sanctuary and the capital city of Mylasa, as well as about the active intervention in the practicalities of the sanctuary by the Hellenistic kings and their local governor, Olympichos. The architecture of Labraunda has contributed to architectural history above all with its two andrones, the most impressive banqueting buildings of any ancient site, and their use of a mixed architectural order involving Ionic columns and a Doric entablature for the first time in history, a fashion Vitruvius condemns 350 years later.

Work at the site in recent years has shown that the Labraunda fortresses are also Hekatomnid in date, as is the Sacred Way and the many rock-cut tombs. Our work has shed light on the Roman and especially the Late Roman period at the site with its many new buildings. Having survived the Hekatomnid period, the sanctuary maintained its importance. Two major public baths and one tetraconch-shaped private bath were added during late Roman times. The tetraconch is a rare feature in Roman architecture and can only indicate the importance of the site in the 4th century. In the 4th to the 6th centuries two churches were erected on the edge of the pagan temenos. Finally, the Akropolis Fortress was rebuilt as a Byzantine border fort in the Middle Byzantine period (12th -13th centuries), when Labraunda and the Latmos mountains had become a border region between the Byzantine Empire and the new Seljuk state.

Future work at Labraunda holds great promise. The geophysical investigations of 2009 indicated several new areas for further work: another bath with a hypocaust in the northeast, a possible temple in front of the East Stoa, and a new circular room in the East Bath. Furthermore, a continued search for Persson’s Bronze Age should be conducted in the area of the Sanctuary Spring and the Split Rock (which may be a Kybele Sanctuary). As the Labraunda project director, I stay convinced that Persson was right in searching for a connection between Bronze Age Krete and Karia. Labraunda is most likely the site of an ancient nature cult where a meeting of the God of Heaven, found in the mountain location and its thunderstorms, and the Goddess of Earth, who lived in the Split Rock and its Sanctuary Spring below it, was envisioned. Future work may well reveal further evidence of the site’s earliest history.

Finally, there are the maintenance and the ‘valorisation’ of the site: we have put up information signs at the buildings, built protection shelters over sensitive excavations, erected fences and placed picnic tables at the site. We are also planning for a conservation project for the south wall of Andron A. Labraunda is a very rich site, and, as our recent work has shown, its history stretches into the Middle Byzantine period. For more than 60 years, Labraunda has been the archaeology field school and study place for Swedish archaeologists, architects and other researchers and I can foresee Labraunda continuing to play a significant role as a meeting place for Swedish, Turkish and international scholars in the future.