The project entails an intensive survey of the site architecture, as well as test excavations of spaces within and outside the fortification wall. It results in updated observations on the chronology and phasing of the site based on pottery dates from the new excavation and comment on the preserved architecture as it compares to other settlements of the period.

The fortified settlement of Malthi in northern Messenia (latitude 37°16'0.93"N; longitude 21°52'56.81"E) is a crucial source of information for social organization in Middle to Late Helladic Greece. Malthi provides a rare example of a fully excavated settlement of this period. The excavated remains (ca. 1.12ha) within the fortification wall include a series of houses, storage facilities, industrial spaces, and possible public architecture, while in the valley below are two tholos tombs and an unexcavated settlement of the Late Helladic (LH) III period. In spite of these promising features, the site has yet to be studied systematically. Since the appearance of Natan Valmin’s publication of the excavation in 1938, only a handful of attempts have been made to return to the settlement in any significant way.

The chief aims of the current project are to: 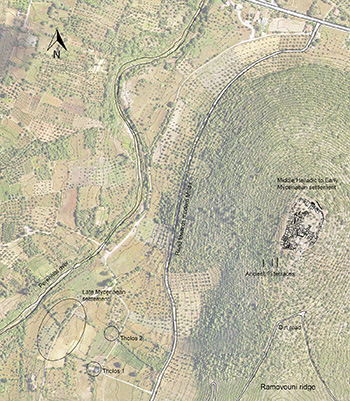 Because the architecture of the settlement has been fully exposed within the bounds of the fortification wall, Malthi is uniquely suited for an architectural study of an Early Mycenaean town. Not only is this one of the most completely preserved settlements of the Shaft Grave Era, but it also offers an important contribution to the study of sites peripheral to the later palace centers. Particularly because the settlement does seem to be constructed as a single, planned project, it is crucial to interrogate how and why it arose, as well as the circumstances of its subsequent abandonment. It is important to note that Malthi is not alone in the Soulima Valley.

Settlement in the area appears to begin as early as MH II. The nature of this settlement is difficult to assess—Valmin’s identification of architecture belonging to the phase prior to the fortification wall has proved problematic to confirm. At a point in LH I, the inhabitants dug away a large amount of soil in order to found a large-scale, labor-intensive fortification wall on bedrock. The stones from this wall were likely hewn from the bedrock itself, and were laid in progressive layers to support the weight of the settlement interior. At the same time, the interior of the settlement was rapidly reformulated to account for this wall. Later in the Mycenaean period, at least the northern portion of the settlement was abandoned or destroyed, and may subsequently have been used for burial. If our preliminary observations of the old finds are correct, the settlement was largely abandoned no later than LH IIIA1, only to be sporadically visited in the Early Iron Age and in Byzantine times.