Skedemosse –the Ritual Landscape and Early Medieval Horse-races in Scandinavia and Beyond.

This project studies how ritual horse races and 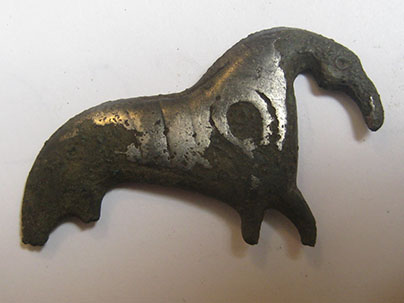 horse-fights in Scandinavia and North-western Europe was spatially manifested in the landscape and topography. The starting point is Skedemosse on the Baltic island of Öland, a well-known pre-Christian ritual site, where people, animals, especially horses and weapons have been sacrificed for a long time, and some other similar, but lesser known places on the island. Skedemosse has previously been interpreted, based on the many horse sacrifices at the former lake and the place names (skede, skeid, skee names), as a place where horse races and round ups of horses and cattle took place. However, new discoveries in the area around the former lake have shown that the ritual landscape was considerably larger than previously thought. This applies especially to the discovery of a number of sacred place names and names that, in one way or another, refers to horses as such and horse-races or horse-fights around the former lake, as well as the rediscovered of an ancient fort in the middle of the lake and other, in this context, relevant archaeological discoveries. Comparisons with well-known early medieval horse racing venues in the British Isles, especially the so-called Lughnasa sites on Ireland, have shown that there are large similarities, topographically, archaeologically and onomastically, with the new discoveries around Skedemosse. Based on the knowledge from the written sources from Ireland and the new knowledge from Skedemosse area, other places in Scandinavia with skede –names and where horse-offerings has been found, especially Sweden and Norway, will be studied through detailed spatial mapping of each individual place, where place-names, ancient monuments and topographical features will be in focus.

The aim of the project is to try to understand the role of horse racing in the early medieval societies. Essential questions are; what other ritual, socio-political and societal activities may have been linked to these races? What role did these horse races and stallions-fights had for the creation of identity and affinity within the early-medieval political units?