A Colonial Arena: Landscape, People and Globalization in Inland Northern Sweden during the Early Modern Period 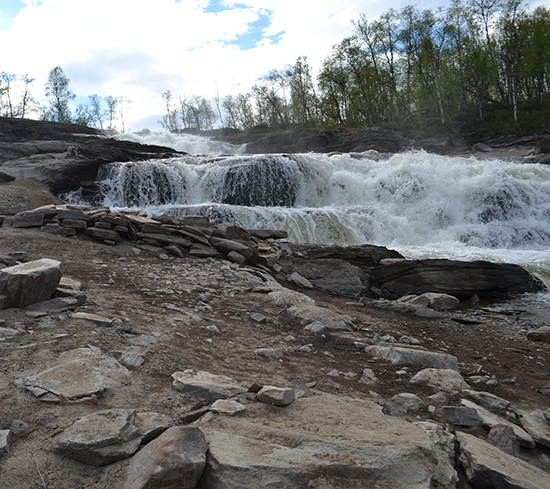 The early modern society’s insatiable thirst for raw materials, especially metals, resulted in an extensive exploitation of inland northern Sweden. Forests were cut down to supply the works with building materials and charcoal. Mines opened and rivers were dammed. These intensive industrial ventures took place in a global context of expanding industrial production. Europeans had colonial projects around the world, mining ore, cultivating sugar, tobacco, industrial productions of ceramics and textiles often with local indigenous and more or less enslaved labor. European migrant workers spread at the same time around the Atlantic world to work in the factories and mines. The early modern works and plantations were multicultural contact zones between people with different languages, religions and identities.

The extent of the Sámi contacts with works and contemporary market places is not known in depth, despite a rich source material. This is partly because the colonial history and the colonial relationships have not generated much interest in Sweden. Another reason is that the source material bearing evidence of this history requires a multi-disciplinary approach. Works owners, trading companies, the state and the church can be studied through the written documents, while the Sámi history needs to be understood through the material remains – through the small finds of the settlements, the religion and the daily life. In order to capture this historic process archaeology plays a major role.

By combining the written sources in the broad sense, such as maps and images, correspondence, court records and other archival documents with the material remains, the project A colonial arena intents to study how cultural contacts between Sámi and other communities in inland northern Sweden were perceived and what role these contacts had during the early modern period in the north.

The project is based on "the world's northernmost industry of the early modern period", Kengis works in the Torne Valley, founded in 1645. The works came early in the possession of the Dutch brothers Momma - Reenstierna. The oldest depiction, from 1660, shows an industry seeding with life and with a Sámi settlement, secluded but likely a part of the works, on an island in the river. The list of salaries paid the same year states that Sámi, Dutch, Germans and Swedish and Finnish speaking workers were employed at the works. The Sámi were thus involved in industrialization, although they are largely missing in the official narrative. Further analysis of other contemporary industrial areas in Sápmi and the oldest churches and market places shows a similar pattern.

The early modern colonial history of northern Sweden was in fact a more complex process than often assumed, with profound implications for all stakeholders, both the colonized as well as the colonizing. The long-term historical legacy of this era is still of great importance in northern Sweden and Sápmi, for instance in present-day conflicts over rights to land and water. It is therefore important to examine how colonization, industrialization and globalization interacted and took place in northern Sweden and Sápmi. The project A colonial arena is writing a new history based on the physical traces in the landscape and material culture. The project contributes to a more detailed and nuanced understanding of Sweden's colonial heritage, industrial past and Sámi history.