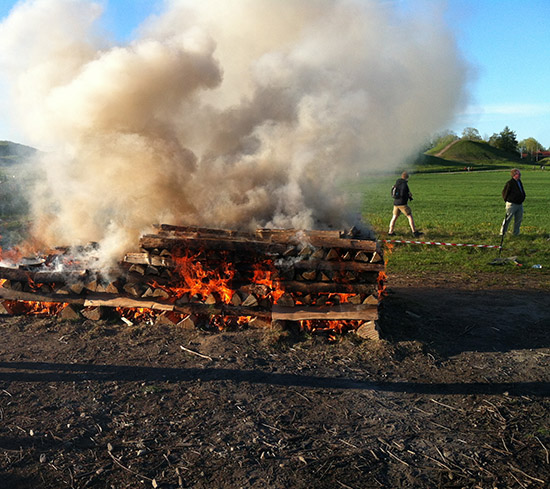 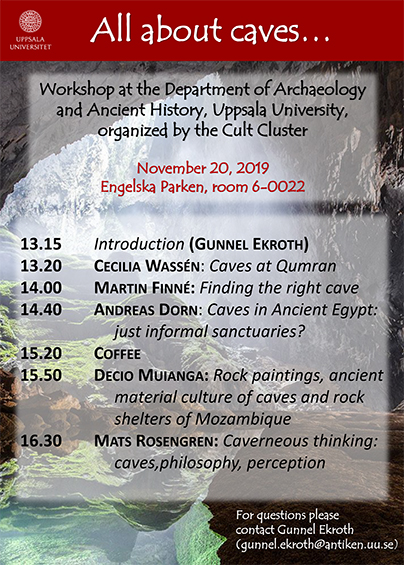 The Cult cluster aims to gather all parties interested in religion in the concept’s broadest sense. Depending on our scholarly outlook, we tend to see religion as a more or less fundamentally distinctive condition of human existence, which can be discerned to some degree in most facets of society, no matter time and place. If not taken into consideration, perhaps as an outcome of the gradual secularisation of modern Western societies, we risk missing or misunderstanding important aspects of the past. Still, “religion” is a complex notion and in many cultures and languages, no particular concept or term exists corresponding to the modern usage. How we define religion and how we access it through our sources is therefore a question of methods and of classifications, but also of the extant source material and how it is defined.

Within our department, work relating to religion is undertaken within a broad field including ancient Egypt, Greece and Rome, the Pacific and Scandinavia. All types of evidence are considered - material remains, images, written records as well as oral accounts - from the starting point that each category reflects its own reality. The fact that our sources do not necessarily concur but rather complement or even contradict each other, is seen as an advantage that can help to stimulate research by raising new questions or reformulating old ones.

Based on our research interests and competences, the Cult cluster focuses on three particular themes, approached from a variety of empirical materials, methods and theoretical frameworks in order to combine our competences and perspectives, and to profit from the synergies created.

We will explore the meaning and role of the place or location, mental as well as physical, for religion. The creation and re-creation of an environment through ritual actions and material expressions can be seen in the re-use of Bronze Age burials on Gotland as well as in Greece, the consecutive constructions of ritual landscapes and sanctuary spaces in Egypt, the Pacific and ancient Turkey. The process of creating a location through religion is a complex one, where the place eventually takes on a life of its own, which affects ritual behaviour.

Ritual practices opens up a vast field of studies as how we define and identify rituals. Of central interest is to carefully explore and define how rituals were performed in order to proceed to how they are to be interpreted as well as their role and function in society and for the individual. Specific areas of study are sacrificial rituals in ancient Greece and burial practices in Neolithic and Bronze Age Scandinavia. Our combined approach across time and place makes it evident that we constantly need to (re)consider the terminology, categories and methods we use to study ritual.

Finally, the notion of belief tends to be allocated a minor role in the study of past and non-European religions, as the Christian belief paradigm (sub)consciously tend to influence our approach and what we focus on. Of particular interest for the cluster is how beliefs is materialized and expressed through ritual, repetition and tradition. Another central issue is the perception of the “sacred” and its relation to the “profane”.