Exploring the Greek sacrificial animal from the literary, epigraphical, iconographical, 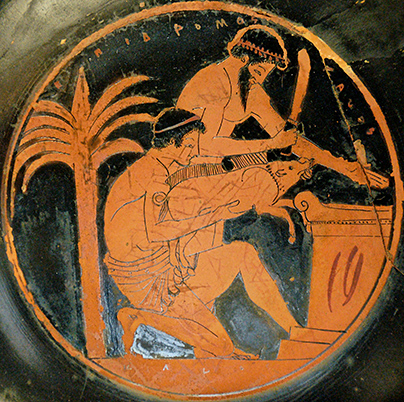 Animal sacrifice was the most important ritual within ancient Greek religion (ca 1000 BC to 200 AD). Through animal sacrifice men communicated with the gods to ask for help, show their gratitude or honour the divine party, but the ritual did also lay down the differences between gods and men. Depending on how the animal was divided and who received what, and whether the meat, blood and innards were kept raw, cooked or burnt, it was established who was immortal and mortal, respectively. The division and handling of the animal also marked differences in status between humans, individuals as well as groups, linked to what part of the animal one received. Each body part had its own meaning and function within the ritual, but in what way and why remains to be investigated in more detail.

The conference From snout to tail brings together 20 internationally well-known scholars with profound knowledge of the ancient source material and ancient Greek religion to explore the handling of the different parts of the animal, from snout to tail. The aim is a better understanding of the use and meaning of the animal’s body within sacrificial ritual through a thorough interpretation of the complex Greek sacrificial terminology, representations of ritual preserved on pottery and reliefs and animal bones found in Greek sanctuaries. The results will provide new insights as to how animal sacrifice worked as a means to communicate with the gods and establish the world order. The understanding of animal sacrifice in Greek antiquity is central for the understanding of ancient individuals, their society and relation to the divine.

The main methodological aim is to integrate all kinds of extant ancient sources: texts, inscriptions, images, archaeological material and preserved animal bones. It is only through such an approach that we may grasp the complex ritual reality. From a methodological perspective, this empirical width is innovative and creative, as scholars tend to stick to their own fields. A zooarchaeologist rarely knows ancient Greek while a philologist rarely has competence in the interpretation of images or identification of animal bones. Therefore, the conference wants to highlight and develop the importance of a work mode that makes use of the ancient evidence as fully as possible through cross-disciplinary dialogue, but also to stimulate and establish collaboration between scholars across disciplines.