Yunyun has been with us as a master student in Uppsala for a year. 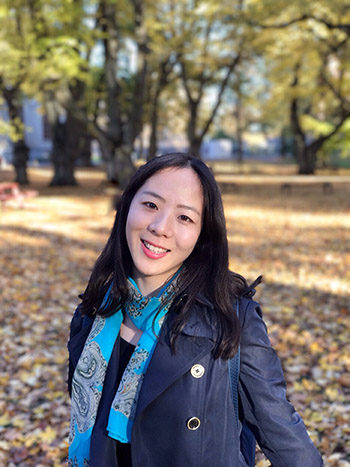 Could you tell us about your background?

I come from the inland of China, and I took my master’s degree in archaeology at Lanzhou University. As a child, I was very interested in the traditions of old – my father had many old things, pottery, stones, and used to tell us histories and stories, allegories about them.

Archaeology is also a popular subject among Chinese young people today – one of the reasons is the novels by Nan Pai San Shu (see link below) about different archaeological sites. Although they mostly deal with grave robbing, it has sparked the interest of many young people for archaeology and our history and traditions. As I grew older, I realised the possibilities of studying these histories further – many new excavations opened up. I became interested in an excavation in the North Tarim basin, originally investigated by the Swedish archaeologists Sven Hedin and Folke Bergman. Chinese archaeologists continued these excavations in the early 2000, and made fascinating finds.

Is the Swedish connection the reason for why you study here in Sweden?

I originally learnt German and planned to have a PhD study in Germany. Then I got the opportunity to be a teacher’s assistant for GIS courses at my university when Daniel Löwenborg came to teach, and realised how important this tool was. The GIS component of the master’s course has since been my favourite.

Besides, I was impressed by the landscape research view from Uppsala University during the Silk Road conference held by my home university in 2014. I liked this promising research angle and also got some ecolinguistic perspectives along the Silk Road from Christiane Schaefer in 2015. These ideas have broadened my insight into what I can do in the future and pushed me to study here.

What are your plans for the future?

I would like to continue my studies and to be accepted to the PhD programme, to continue the research about cultural interaction between the west and the east along the Silk Road. Sweden’s PhD programmes have a freer academic atmosphere than I have been used to, and I would like to write my thesis here in Uppsala, if possible. After that, I plan to return to China to accumulate more field excavation experience and start to undertake some projects. It would be promising to teach both GIS and theories in universities, especially to integrate them with the Chinese archaeological development.

I always had a wish that I could travel around the world as a traveller and an explorer, not a tourist. As the Chinese old saying, “It is better to travel ten thousand miles than to read ten thousand books.” But it is also interesting that our traditional moral requirement from Confucius indicates “While your parents are alive, do not travel far away; if a journey has to be made, you must tell them where you will go.” In modern society, I would say it is of course okay to travel away, but it might be difficult for the parental generation to accept the young backpackers’ exploration. Anyway, I believe I will manage it someday by my bike with our ancient geographic books, such as Great Tang Records on the Western Regions by the monk Xuanzang in Tang Dynasty (618-907AD). Maybe, lie down on the Taklamakan Desert and look at the starry sky, just like Aurel Stein.

Would you have any advice to prospective master students from abroad?

First, I would suggest to focus on the English language training [the master's courses are offered in English]. At the beginning, I had to spend a much longer time understanding texts, and I could not understand all the lectures during the first two months. I even used recording pen to record some lectures and listened again after courses, but it did not work well. My taking four courses at the beginning was one reason that I could not finish the required reading before each class.

Second, the cultural openness is very important. Students from Asia might share some common culture with young people in Europe, like sports, rock music. But our social concept is so different. We can easily misunderstand something or cannot get some humour, especially language humour. I have tried hard to get out from the comfortable circles of Chinese friends, to know more Swedish culture and society. I know I managed it – I find that I am a bit different now from when I first arrived in Sweden; my family remarked on it when I went home this summer. For instance, I became a coffee drinker and candle fan. :-)

Third, please keep your confidence and take it easy. In Asian countries, it might be common to compete with each other during study. When we study in a totally different country, we will be fresh to a lot of things and lose our past advantages. I know it is easy to get anxious and depressed, since I have suffered sometime. Please forget what we had in the past and remember we are challenging ourselves. So, from now, we will be better and better.