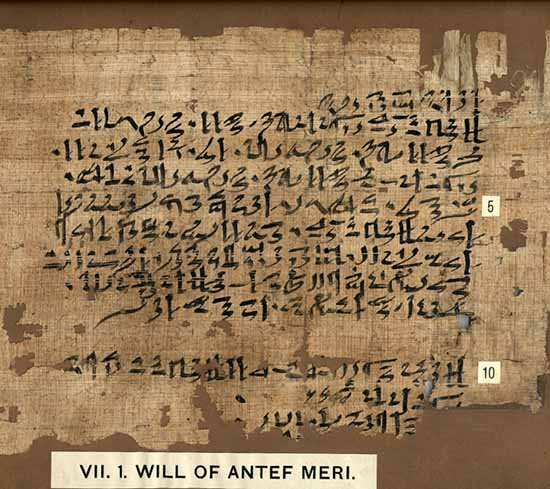 These courses are part of Egyptology B

The two courses offer a thorough introduction to the linguistic system of Middle Egyptian, the classical phase of the ancient Egyptian language of the so-called Middle Kingdom (ca. 2050–1700 BC). They run at 50% over the entire spring semester with two lectures per week (usually Tuesdays and Thursdays).

In Middle Egyptian I you will become familiar with the basics of the Middle Egyptian grammatical system. Ancient Egyptian is a foreign language, and learning it is not much different from learning any unfamiliar language. However, because it is a dead language, this means that we have to approach it from the grammatical perspective. During the course you will be introduced to the basic concepts and principles of doing just this. You will study the way in which the language was encoded in hieroglyphs and learn how the Egyptians expressed past, present, and future descriptions, constantly building up a vocabulary and your understanding of the special features of Egyptian. At the end of the course you will have an idea of what are the main issues and problems of the grammar of Middle Egyptian. You will also be able to read material written in the language, and you will be ready for further, more demanding topics that every Egyptologist must face when dealing with ancient texts.

The reading and analytic skills that you have acquired in Middle Egyptian I will be further enhanced in Middle Egyptian II. The course consists of two interconnected parts. In part one you will be extend your understanding of Middle Egyptian phenomena learnt earlier on as well as explore new and more complex topics not yet covered. In part two you will then put your newly acquired skills into practise and begin reading actual Middle Egyptian texts handed out by the lecturer and prepared by you for each class. During this second part you will also gain first-hand experience on the use of texts for obtaining information on the history, culture, and religion of the ancient Egyptians.