The course is part of Egyptology C, and it is designed to provide an introduction to ancient Egypt’s international setting and relations with the outside world from the Early Dynastic Period to the end of the New Kingdom (ca. 3000–1000 BC).

Ancient Egypt is sometimes characterised as having flourished in splendid isolation from contemporary cultures. This image does not, however, correspond to the reality. Instead, the Pharaonic culture was deeply involved and in contact with neighbouring cultures and peoples, in various different ways. These interconnections were reciprocal: the Egyptian culture absorbed foreign influences, and Egypt’s neighbours acquired cultural and material traits from her. The course traces these various modes of interaction, focussing particularly on Egypt’s military-, trade-, and other contacts with the Levant and the Nubian Nile Valley, but without forgetting relations with the peoples of the eastern and Libyan deserts. The survey of these interconnections is both chronological and thematic, and centres particularly on Egypt’s military and commercial involvement with other areas of ancient eastern Mediterranean and north-western Africa. 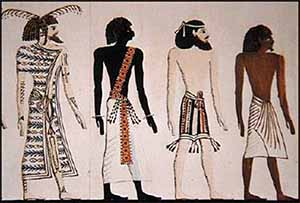