Alex is a first-year student on the BA program in Archaeology, located in Visby.

What is your background? 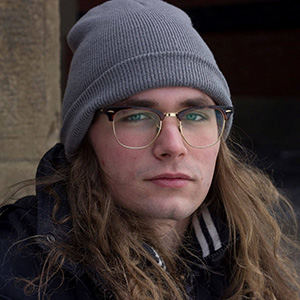 I was brought up in Austria, where I left school early and instead began training and working as a salesperson. I came to Sweden in 2017, and after completing a number of classes (learning Swedish) with the intention of studying music, I took a class in history and became interested in history and archaeology.

Did you study anything before the BA program?

No, this is my first subject at university.

Why did you elect to study archaeology with us?

I originally applied to do the program in Uppsala, but instead I was accepted at Campus Gotland. I don’t regret moving to Visby; Gotland has much to offer.

I feel enriched after each class – generally, the content and quality of the courses are good.

Classes are online now, what is the difference from studying on campus?

We got a taste of “normal” studying the first few weeks last autumn. We went to classes, saw each other and the teachers and generally had a normal student life. Since then, however, everything has been on zoom. Zoom teaching has its disadvantages, of course; it creates a distance between us and since we had already gotten a taste of how it could be, we notice it more, perhaps.

Any favourite course so far?

As you know, the selection of courses in the first year is quite diverse. My favourite so far has been the Myth and Religion course [Myt, religion och världsåskådning] – fascinating! If I had to choose a second best, it would be Language, texts and writing [Skrift, språk och text i tidiga kulturer].

What is your purpose with the training – field archaeology, museum work, research?

I began the program without knowing what I wanted to do after I finished, unlike many of my classmates. However, I now realise that I want to continue with Assyriology, and thus I have just sent in my application for that course for next term. It feels as an adventurous choice, but has so much potential. So much material has not been translated into Swedish, since much of the research in the subject has been published in German and French. With my language background, that could very well be an option.

Would you consider continuing your studies after the BA program?

If there is an MA course suitable for my purposes – absolutely! The more studying that can be done at university, the better. When you leave, and have to do it on your own, I think you lose out.

Would you recommend the program to others?

Absolutely! Even with no idea of what you want to do in future with the training. The program allows you to keep your options open and make an informed choice.