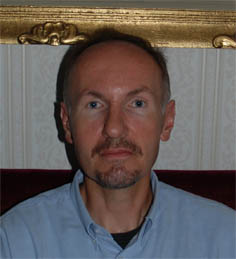 Anders Kaliff was born in 1963 in Linköping, Sweden. He is a Ph. D. and Professor in Archaeology at Uppsala University and has worked as an archaeologist since the mid 80s.

After training at Uppsala University , Kaliff worked for some years as an archaeologist at different archaeological excavations, at Swedish and Norwegian museums as well as the Swedish National Heritage Board. During 1989-1999, he was employed by the Swedish National Heritage Board, Department of Archaeological Excavations as manager of different archaeological projects. During this period, he continued his association with Uppsala University and successfully defended his doctoral dissertation Grave and Cultic Place in 1997.

Since 1999, Anders Kaliff has been employed at the Department of Archaeology and Ancient History, Uppsala University , as a researcher, lecturer and supervisor. In 2001 he was appointed Associate Professor and in 2008 Professor in Archaeology. He has also been Director of Studies for undergraduate studies (2001-2002), and for graduate studies (2005). During the period 2003-2008 he was partly on leave, working as Deputy Head and later Head of Department at the Swedish National Heritage Board, Department of Archaeological Excavations.

Kaliff´s scientific production includes work on a variety of topics, covering all periods from the Mesolithic to the Viking Age. The dissertation, as well as a number of scientific and popular publications deals with interpretations of cosmology and religion in ancient Scandinavian society, mainly based on excavated graves and ritual sites. The theoretical basis is mainly the phenomenology of religion and analogies with other cultural contexts. The theoretical framework concerning interpretation of cosmology and ritual is in focus. Other publications deal with cultural contacts between Scandinavia and continental Europe, during Bronze Age and Iron Age, as well as settlement archaeology. The Swedish province Östergötland, where Kaliff has managed a large number of excavations has been an important focus for research. The area has provided material for different articles as well as a monograph on the prehistory of the province, mainly from a perspective of settlement archaeology and the development of central places. Baltic Sea contacts in prehistory has been an area of research in cooperation with colleagues in the Nordic and Baltic countries. He has done interdisciplinary work together with scholars in History of Religion as well as Human Geography.

Kaliff's international experience includes the Middle East, where archaeological projects have been initiated and managed at al-Lisan in Jordan together with a the Swedish colleague Richard Holmgren (The Swedish Dead Sea Expedition, SDSE) in cooperation with the Department of Antiquities of Jordan. He has also conducted field work in Estonia as well as in Nepal and initiated an archaeological cooperation between Chinese and Swedish archaeologists, including a conference in Beijing in September 2005. Kaliff has participated in a number of Swedish, Nordic and international conferences and was for several years a board member of the Swedish Association of Archaeologists. He is also a member of the Nathan Söderblom Society in Uppsala . His scientific production numbers c. 60 monographs and articles, c. 30 works of popular science as well as a number of archaeological excavation reports.

Current research topics includes comparative studies between Bronze Age and Iron Age Scandinavia and other so called Indo-European religions, with focus on the old Vedic and old Iranian ritual systems. Burial customs as well as sacrificial rituals are in focus. The current research also includes work on the Iron Age settlement archaeology in western Östergötland.