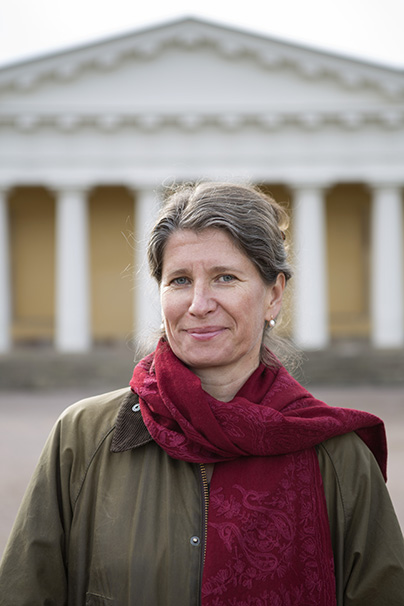 Greek religion. I am interested in rituals, especially various forms of sacrifice: how they were performed, what was sacrificed, which equipment was used, where the actions took place and which meaning they carried in ancient Greek society and the perception of the world. I am also working on sanctuaries and the construction of the sacred from a spatial perspective. A third area of research is the Greek landscape Argolid during the Geometric and Archaic period (ca 900-500 BC), especially the material culture. A common strand in my work is the integration of various kinds of evidence (texts, inscriptions, iconography and archaeology including animal bones) as they reflect different ancient “realities” and it is therefore of importance to explore the variations and contractions.

I did my undergraduate studies at Stockholm University and received my PhD in 1999 on a dissertation on the sacrificial rituals in Greek hero-cults. I continued my research at Stockholm externally funded by the Swedish Research Council and Riksbankens Jubileumsfond, and later as a research fellow funded by the Swedish Research Council. I have spent longer periods at the Swedish Institute at Athens and also participated in various excavation and other field projects in Greece. In 2007-2011, I conducted my research in Paris, at the Centre ANHIMA (former Centre Louis Gernet), where I am a membre associé. In 2011, I was appointed professor of Classical Archaeology and Ancient History at Uppsala University. 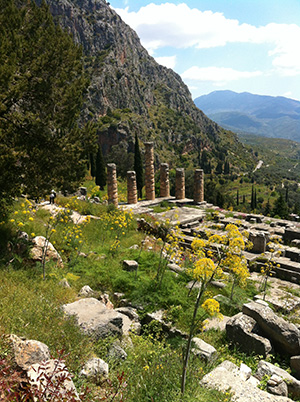 I have just began a three-year project funded by Riksbankens Jubileumsfond, The “profanity” of Greek sanctuaries? Defining the temenos as a space for divine-human interaction 600 BC-200 AD (P19-0384:1, 2020-2022). The aim is to explore the concept temenos in its widest meaning, both as a physical entity and a conceptual construction or notion in ancient Greek culture from 600 BC to 200 AD.

Temenos, ”that which has been cut off” (from the verb temnein, ”to cut”, signified the space which had been set apart for the gods and where their cult took place, i.e. a sanctuary.

Use and access was circumscribed by particular rules, and a boundary was set to protect the purity of the precinct. The gods were also the owners of their sanctuaries. But mortal visitors frequented this space just as intensively as the god were thought to do, though in a different manner and for different reasons. Humans were also the guardians and administrators of the god’s sanctuary. Still, even if the temenos served as a space for communication with the divine world, the interaction between immortals and mortals was not without friction. Ancient sources show that human access to and presence in sanctuaries had to be regulated, as it could cause pollution and damage to divine property. Even if the gods themselves could not be polluted, their sanctuaries could, and it was upon the mortal caretakers to assure purity and proper upkeep of the precinct, and to prevent human transgressions.

An in-depth knowledge of how temenos was used and perceived contributes to our understanding of the intricate relation between gods and humans in Greek antiquity, but also what the Greeks considered as sacred and as profane. How did the fact that Greek sanctuaries were set apart for gods, but visited and cared for by humans, influence how they were perceived, planned, built upon and used? Whose perspectives and needs dominated, the divine or the human? The project takes its starting point from theories on space, most of all that space is consistently constructed and produced depending on the context, who participates and which actions take place. The ancient sources make clear that a temenos can be created by gods as well as humans, and that it is used by both parties, but the human side of this process has not been sufficiently taken into account. The empirical basis of the project is a comprehensive study of all relevant ancient evidence, written as well as archaeological, as a problem with previous studies is that the source material has not be explored in full.

The project proceeds in three steps:

1) Temenos as a constructed, demarcated space. 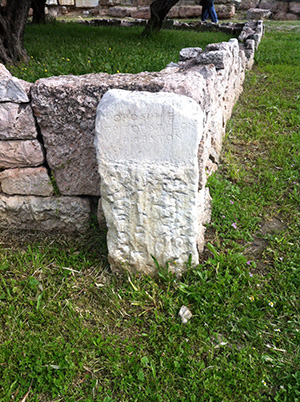 The first step is a systematic analysis of the term temenos in texts and inscriptions to map its relation to other terms for demarcations and space in order to define its use and meaning. The study of the written sources is combined with an examination of the archaeological evidence for temene to explore the physical expression of the demarcation of space. This establishes the perception of temenos as a delimited space physical and cognitive entity in Greek mentality, and how its boundaries were upheld.

The project will result in a new understanding of the concept temenos in ancient Greek culture, both as a religious notion and a physical entity, but also of how the Greeks interacted with their gods and how they perceived and applied what we today designate as sacred and profane.

Other research interests and projects

My dissertation from 1999 dealt with hero-cults during the Archaic to the Early Hellenistic periods (ca 700-300 BC), i.e. mythical or historical persons who had lived and died and received a cult after death (http://www.kernos.ulg.ac.be/supplements/ekroth_2002.html). The aim was to define the type of rituals performed and explore why there were variations in the ritual practices, as well as question the traditional interpretation of these cults which has dominated scholarship since the 19th-century. By analysing all epigraphical and literary evidence for sacrifices to heroes as well as criticizing the traditional view of Greek religion as divided into an Olympian and a chthonian sphere, it can be shown that ritually speaking hero-cults are very close to the cults of the gods.

Animal sacrifice concluded by meals (thysia) was the most common ritual, while libations of blood and total destruction of the offerings by fire (holocausts) can only be evidenced in particular instances and for particular reasons. The fact that the heroes were dead does not seem to have affected the rituals to any greater extent and the origins of hero-cults are not to be sought in the cult of the dead. I have later explored specific aspects of hero-cults at individual sites or monuments, but the heroes are more or less a concluded chapter in my research.

The Argolid in the Geometric and Archaic periods 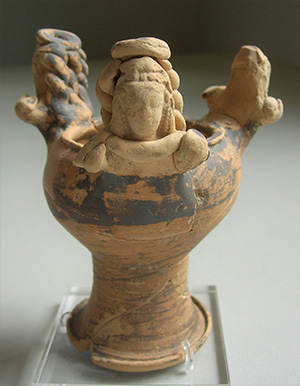 I have participated in a number of field archaeological projects in Greece, ranging from the Bronze Age to the Roman period. At present I am involved in the publications of two excavations. The first concerns a Geometric-Archaic cult-place at Berbati, located next to a Mycenaean tholos tomb. The study and publication of this deposit, which contains hundreds of vessels for the consumption of wine, cooking and ritual acts, but also figurines and miniature pots, will greatly increase our knowledge of Argive Archaic material culture, an area which is insufficiently studied, due to the limited material at hand. The Berbati deposit will also contribute to our understanding of the social structure of Argive Archaic society and relation Berbati had to neighbouring communities, as well as to how the Iron Age population reacted and interacted with traces of the past visible in the landscape where they were active. The second project concerns the publication of Geometric finds from the excavations at Mycenae undertaken by the British School at Athens. Later periods at this major Bronze Age site have received less interest and an analysis of the pottery as well as the extant Geometric remains will hopefully clarify our view of the situation in the 9th and 8th centuries BC. I am also interested in miniature pottery i Greek sanctuaries, in particular which religious needs these vessels fulfilled and how they relate to larger shapes made of clay, metal or other materials.

A main interest in my research is sacrificial rituals. During 2007-2011 I 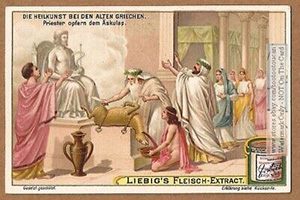 worked on a project funded by Riksbankens Jubileumsfond (P2006-0430:1-E) which aimed at mapping the concrete, practical ritual reality of how animal sacrifices were performed, and analysing the interaction between practice and theory as well as practice and theology. This research is still going on, as the field offers innumerable aspects to explore. The study of Greek sacrifice can be said to be “over-theoretizied” considering our imprecise empirical knowledge. My basic perspective is that we first have to know what the Greeks did to be able to ask why and try to grasp the theoretical and theological structure.

The method also here consists of an integration of all possible evidence from ca 700-200 BC: texts, inscriptions, iconography, archaeology and osteology. The animal bone evidence from Greek sanctuaries, is of particular importance, as it has not been fully explored previously. This material and in combination with inscriptions, texts and images, can clarify the Greek sacrificial terminology and how the animals were butchered and distributed, and also reveal actions which we do not encounter in the written sources.

I have worked extensively on the handling of blood, meat and bone within sacrificial ritual, as well as different aspects of altars and the notion garbage in Greek sanctuaries. Greek sacrificial ritual evolves around negotiating the fact that gods and humans in the distant past actually ate together as equals, but that mortals and immortals now are separated but still can come close by animal sacrifice in particular. To make the gods come near, though not too close (with involves real danger) constitutes the core of sacrifice and the rich variations within the rituals express the possibilities of this intricate interaction. What you eat, how it is cooked or not, where you eat and together with whom are essential aspects in this context, as well as what is to be considered as sacred or profane.

As part of my work in mapping the ancient ritual reality I have conduced some practical experiments, for example, to better understand how the tails of the sacrificial animals were burnt in the altar fire to divine the will of the gods, or by butchering animals to clarify which meaty parts are represented on Greek vase-paintings from the 6th and 5th centuries BC.

In May 2014, a cremation experiment was carried out at Old Uppsala to better understand both ancient Greek sacrificial rituals where the animals were burnt whole (holocaustic sacrifices) and Scandinavian cremation burials. A lamb and a pig as well as various kinds of food (e.g. fish, grilled chicken, salted meat, bread, apples, figs, eggs, cheese, onions, mushrooms, nuts, grand and pots with honey) were brunt on a pyre. The effect of the fire on the items burnt were documented continuously and the pyre was also excavated to study to what extent the fire had affected the state of preservation of the bones.