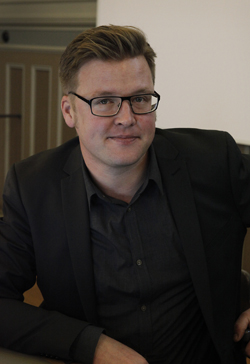 It was not until the Middle Ages that the North and West European concept of the medieval town was fully translated and manifested in Scandinavia. The appearance of towns enabled new forms of living, thus enabling distinctly urban identities. This study aims to build a bottom-up and micro-historical narrative of medieval urbanism through an archaeological study of domestic material culture from the 12th to the middle of the 16th centuries in Uppland, Sweden.

The urbanisation of medieval Scandinavia is closely linked to Christianity, state formation, commercialisation and international trade networks.  The dynamics of the networked townscape in Uppland was fluid and ever changing in response to both external and internal factors, as well as transformations of the natural landscape. The structural changes within and in between the towns were significant and likely affected the daily activities, livelihoods and life courses within. These longer processes and short term changes are understudied and largely unrecognised in the use of the historical narrative today.

This study encompasses selected archaeological material from the three towns of Uppsala, Enköping and Sigtuna, all situated in the landscape of Uppland in central Sweden. Social identity construction through “urban material culture” will be studied through a focus on “emblematic” or “type-fossil” signatures in the assemblages. A comparative case-study of 14 excavated townplots, representing different social settings, will be undertaken. The archaeological assemblages will be studied using correspondence analysis. The results of the archaeological analysis will further be related to a close reading of historical sources and macro-historical narratives by applying Urban Dynamic Systems theory.

Through a comparative focus on the material culture of urban households, read through a lens of different and changing social identities, a previously understudied area of research on medieval urbanism will be explored -  addressing questions of agency, activities, social groups, consumption, choice and negotiations of power within the medieval towns.

Questions of special concern to the project are: