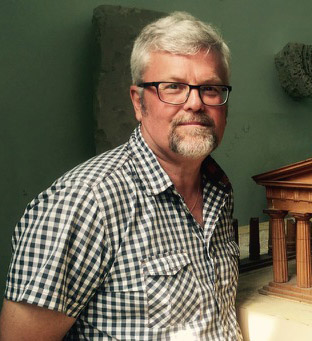 My scientific production can be linked to the three archaeological excavation projects in which I have been involved or for which I have been responsible, namely at Morgantina in Sicily, at San Giovenale in Etruria and at Labraunda in Turkey.

In connection with my four years as a graduate student at the University of Virginia, I participated in the excavation of the Greek colony Morgantina in Sicily, between the years 1983 and 1992. My work at Morgantina consisted of tracing, describing and partly excavating the city’s defenses. This work lead to my doctoral dissertation ‘Fortification towers and masonry techniques in the hegemony of Syracuse, 405-211 B.C.’. During these years I spent two summers excavating and studying Greek fortifications in Provence (Glanum & Marseilles). My dissertation analysed a special ashlar-wall building-technique employing headers and stretchers placed in such a way that they created ‘masonry chains’. These masonry chains anchor the two faces of the wall to each other and to the filling behind. I could show that the earliest walls built in this technique were the fortifications erected around Syracuse by the tyrant Dionysios I around 399 B.C. My interpretation of this wall building technique is that it is the technique called ‘emplekton’ in ancient texts by Pliny and Vitruvius. I have argued that this technique was ca thirty years later introduced in Greece by Epaminondas and by Maussollos to Asia Minor (and Labraunda).

When I came to the Swedish Institute in Rome in 1993 as a research assistant, I got involved with the Institute’s excavations in Etruria. My three-year education in architectural history was a good background for studying the unpublished ‘aristocratic’ houses on the Acropolis of San Giovenale, excavated in 1961-1965. The book came out in 2006 called ’San Giovenale IV:1. Area F East. Huts and houses on the Acropolis’. It is a complete publication of the excavated architectural remains and the artefacts. The houses belong to the group of the earliest rectangular houses in Italy, showing how the Etruscan villages turned from oval huts to ‘real’ houses, soon also employing terracotta roof tiles. This change in house form was mirrored in tomb architecture and House I in the excavation area is very closely paralleled by the Tomba della Capanna in Cerveteri from ca. 700 B.C. These houses in San Giovenale are very important in the history of architecture in Italy, as very few houses from this period have been found (675-625 B.C.). In 1999, I directed a smaller excavation in San Giovenale in order to establish the course of the early fortification walls. We discovered that under the ashlar wall of the archaic period there were clear traces of a wooden palisade from the protovillanovan period. The excavation is published in Opuscula Romana 1999.

Already in 1993, I participated in the field work in Labraunda under the leadership of Pontus Hellström, then professor at Uppsala University. After my years in Rome, I got a teaching position at Uppsala University in 2001 and since 2004, I am the director of the Labraunda excavation project. The new project at Labraunda is divided into three study areas that I have initiated and which were given very little attention in the early excavations. Understandably, the early excavators had concentrated on the marble buildings of the central sanctuary. The new studies emphasize the surroundings of the sanctuary and the little known Late Roman period: I am documenting and excavating the five free-standing towers and the ring-fort on the acropolis; Jesper Blid of Stockholm University is inventoring all of the remains of Late Roman and Byzantine buildings; Olivier Henry, from Bordeaux University and now at Institut Français d’Etudes Anatoliennes, is carrying out a complete documentation and excavation of the 80 tombs known around the site and along the Sacred Way, together with osteologist Anne Ingvarsson-Sundström of Uppsala University. The remains of the Sacred Way and the 42 spring houses connected with it have been studied. The new work at Labraunda will result in three new volumes: one on the ‘Forts and fortifications of Labraunda’, one on ‘Labraunda in Late Antiquity’ and finally a volume on ‘The necropoleis of Labraunda’, written by the three excavators responsible for the individual sites. Our work in Labraunda is published every year on our website: www.Labraunda.org