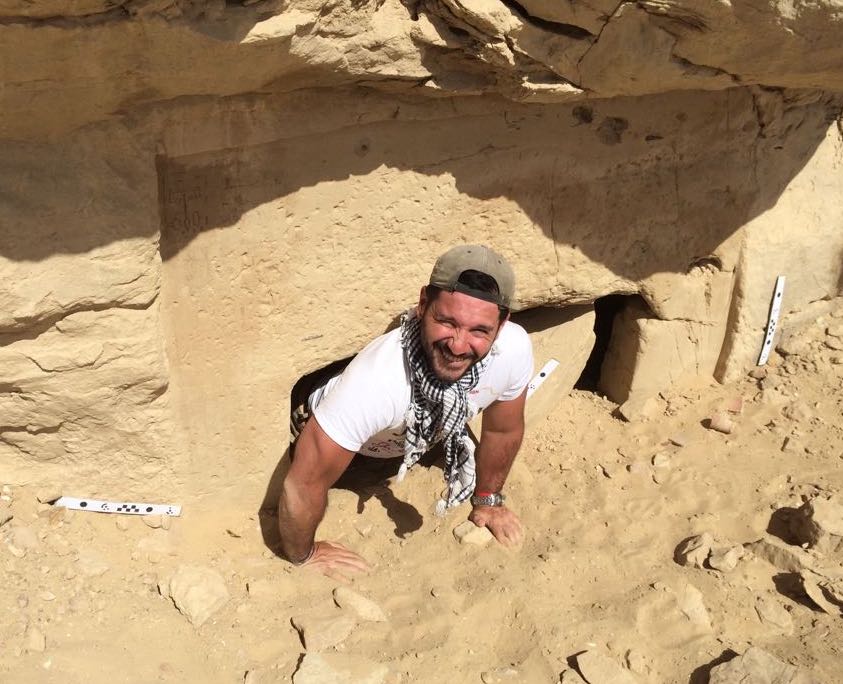 Here at Uppsala University, I joined a large and dynamic department with a tradition in Egyptology dating back to the 1880s, where I collaborate with colleagues both in my field and other disciplines of the Ancient World. My responsibilities are equally shared between research and teaching.

My main research interests lie in the cultural, religious, and social history of Ancient Egypt, particularly during the first millennium BCE and the early centuries CE, at a time when Egypt’s fascinating interconnections with other ancient civilisations are in many ways reminiscent of today’s globalised society.

My main specialism is in textual studies, particularly the study of primary sources in all language phases and scripts of Ancient Egyptian, from hieroglyphs to hieratic, demotic, and Coptic. My interest in written records is always materiality-focused, concerning actual inscribed artefacts, as opposed to de-contextualised texts. I strive to integrate within my work all different areas of Egyptology, starting by overcoming the false dichotomy between philology (‘texts’) and archaeology (‘objects’).

Being on ancient Egyptian soil, working with Egyptian and Sudanese colleagues, is one of the highlights of my job. I am active both in Egypt, where I am Assistant Director of the Oxford / Uppsala fieldwork project in Elkab, and in Sudan, where I am part of a SARS (Sudan Archaeological Research Society) epigraphic team.

I am also passionate about cultural and linguistic interactions in the Ancient World. Combining my training in Egyptology and Classics, I work on multilingualism in Late Period, Graeco-Roman, and Early Coptic Egypt, on the constructions of complex cultural and social identities, and on the transmission of ancient Egyptian culture to neighbouring civilisations, including its reception up to the present day.

I am as passionate about teaching Ancient Egypt as I am about studying it. The two activities, in fact, are hardly separate, and I have found that they inspire and shape one another.

I like actively to involve students in my classes, having them engage with the original sources, encouraging them to research and think independently, revealing how much of what we think we know about the Ancient World may be based on frail assumptions in need of revision, pushing them to challenge such assumptions, and creating an atmosphere of exciting and always respectful debate in the classroom. In one word, I want them to use their study of Ancient Egypt to develop critical thinking, the key of all transferable skills. I also want them to reflect on Egyptology itself as a discipline, to realise that its origins are deeply rooted in the historical injustices of nineteenth century European colonialism, orientalism, and even racism, and to give thought on how we, as twenty-first century citizens, should engage with this problematic legacy.

The rich research collections available on and around campus, with the Gustavianum (Uppsala University’s Archaeology Museum) and Medelhavsmuseet (Museum of the Ancient Mediterranean, in Stockholm), offer fantastic opportunities to allow students to handle and study original ancient artefacts. Once the pandemic eases and international travel resumes, I also hope to take students on study trips and fieldwork to major European collections and to Egypt.

As an LGBTQ+ person, I am clear that everybody is welcome in my classroom. In it, I strive to create a welcoming environment, in which everybody can feel free to present and express themselves as they are most comfortable. I also like to show my students how the history of ancient Egypt, far from being all about pharaohs and pyramids, can also be investigated from fresh angles, such as those of subaltern and queer histories.

Outreach is another strong point in my professional life. I love to get not only my students, but also the wider public enthused about Ancient Egypt and the Ancient World at large, and to prove to them how the life experiences of people who lived and died over two millennia ago is intimately relevant to ours, still today. I am always happy to give public talks and lectures for school pupils of all years.

Students at all levels, colleagues, school teachers, and members of the public are welcome to contact me with enquiries about my work, requests for supervision, and collaborations. I look forward to hearing from you!

For recent publications and talks, see my Academia webpage: https://oxford.academia.edu/LuigiPrada

Amongst the undergraduate classes offered during the 2021/22 academic year, I contribute to: Introduction to Archaeology and Ancient History (Grundår); Ancient Egyptian History (A1). I convene: Egyptian Texts and Hieroglyphs (A4); Ancient Egyptian Material Culture / Museum Studies (B2); Ancient Egypt in an International Perspective (C3). I also participate in the supervision and marking of extended essays (C4) and dissertations (D3).

At the postgraduate level, I teach a demotic reading class and co-supervise a doctoral dissertation on Graeco-Egyptian literary interactions (Uppsala University / Scuola Superiore Meridionale in Naples).