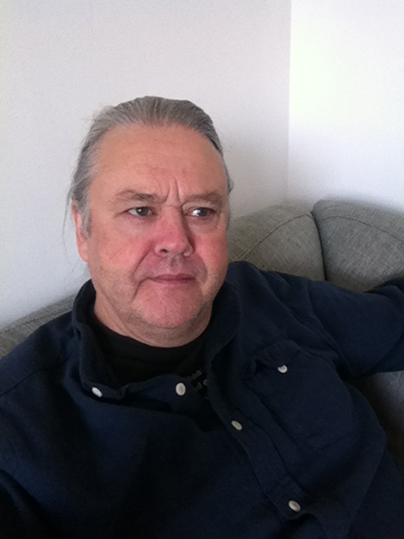 I was appointed as a Senior Lecturer of Archaeology in 2008. My research interests are:

I have a BA from Stockholm University in 1985, and a PhD from Uppsala University in 1994 with a dissertation on “Ceremonial Stone Structures” on the Society Islands in French Polynesia.

I worked in Nordic field archaeology in the time period 1984-1991 at Ålands Museum, Skaraborgs Museum, and the National Herritage Board (Riksantikvarieämbetet-UV and RAGU). During this time I also sporadically worked as an osteologist at Ålands Museum, Dalarnas Museum, the Kon-Tiki Museum and Jönköpings Museum. My Nordic excavation experiences include all time periods from Early Mesolithic to Medieval times.

My research has been divided into two main areas which are the Stone Age of the Baltic area with focus on the Island of Gotland and the Neolithic period c. 4000-1700 BC, and the Pacific area with a special focus on Polynesian archaeology which covers a period from c. 800 BC as well as ethno-historical and historical accounts.

My interest in the Stone Age of Gotland goes back to my time as a BA student when I was involved in ongoing research on the Island, an interest that has remained intact up until today. My special interests in this field have been the Pitted Ware Sites and their extensive burial grounds as well as Funnel Beaker megalithic dolmens as well as late Neolithic stone cist burials. Lately I have also been involved in the excavation and 14C dating problematics of a Late Bronze Age (c. 950-750 BC) stone wall enclosure, as well as, Iron Age (c. AD 200-700) stone wall houses. My special fields in Nordic archaeology are as reflected above are the materialization of monumental architecture of different kinds as well as burial practices.

My Pacific interests goes as long back in time as my Stone Age interests, if not longer. It was during the excavations in 1984 of the only (now confirmed) dolmen on Gotland, that I had the good fortune to be part of, that I as a student started to reflect on the meanings of monumental structures. My Pacific interest on for example Easter Island monuments now could be combined. I wanted to know more about the role of monuments in so called traditional societies to understand more about why people moved around gigantic stone blocks. However, the Polynesian interest completely took over and this ended up with my PhD work on Ceremonial Stone Structures in the Society Islands in 1993.

My Pacific interests have lead me into studies of ceremonial temple structures ahu on Easter Island (Rapa Nui) to the East to the marae/ahu complexes in the Society Islands, to similar sites on the “mystery Island” (it was uninhabited when the island was discovered by Captain Cook) called Christmas Island in Central East Polynesia, as well as to large platform structures on the island of Savai’i on Samoa in West Polynesia. The studies of monuments also lead to studies of chiefly social organizations as well as processes of dispersals, local developments and interaction networks in the area. Another interest has been detailed chronological studies of the monuments as well as early settlement sites in East Polynesia, as well as, the dispersal of the ‘mysterious’ genetically determined South American sweet potato found in East Polynesia in prehistoric contexts in for example Rapa Nui.

Among my theoretical and methodological interests I focus on relational archaeology of material remains as detected by relational statistics (Correspondence Analysis) seen in a practice theory framework.

Neolithic lifestyles and burial practices on the Island of Gotland: Burials as treatments and social practices

The project aims to highlight the Neolithic period on the Island of Gotland in a Baltic Sea context in a long-term perspective to examine how changing climate conditions as well as cultural manifestations and interactions had an impact on human choice in terms of settlement patterns and burial practices.

A special interest of the project is to discover and clarify the great variety in treatments and complexity of burial practices during the Neolithic, especially the varied expressions seen in the  Pitted Ware Culture on Gotland, and how they were entangled in the social interactions of the living and the dead. Burial practices of the Funnel Beaker culture as well as late Neolithic are also investigated to clarify relations of the different burial practices during the Neolithic period on a limited space that Gotland offers.

This research is tied to the department field school project at Buttle, Gotland.  The aim is to explore the detailed chronology of stone wall house clusters (general date frame AD 200-600) to explain settlement dynamics and the role of the different houses. It will also problematize Early to Late Iron Age divisions and transformations. Other questions of interest to the project is the monumentalization of houses and the place with the presence of the largest picture stone on original location as well as understanding the social milieu.

This project is carried out in collaboration with department colleagues Alexander Andreeff, Helene Martinsson-Wallin and associate researcher Victor Melander. 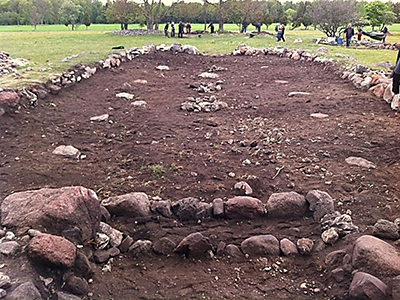 I Tjelvars fotspår: Relationer mellan människor, vatten och land på Gotland – dåtid, nutid och framtid/In the footsteps of Tjelvar- relationships between people, water and land on Gotland – the past, the present and the future.

Through detailed background data to support landscape reconstructions from different time periods, we have initiated a visualization work of various ancient ruins that can attract cultural tourism to the surroundings of Gothem in the northeast part of Gotland. Here we have initiated an interview project with the local population and the tourism industry about how we in a sustainable way in a dialogue between them, the researchers, and the antiquarian authorities can visualize and stage various cultural and natural monuments in the area. One proposal is to create a tourist route (Tjelvar trail) where the visualized antiquity meets the present. The purpose of the project is also that people visiting the sites get the tools to reflect on the change in the landscape that can also raise questions about future relations between people, water and landscape of Gotland.

This is a joint project directed by Helene Martinsson-Wallin, with department Colleagues Paul Wallin, Daniel Löwenborg and Jan Risberg (Geology, Stockholm University). It is also carried out in collaboration and dialogues with Gotlands Länsstyrelse, and Gotlands Museum. It is locally funded by Special research money, Campus Gotland. 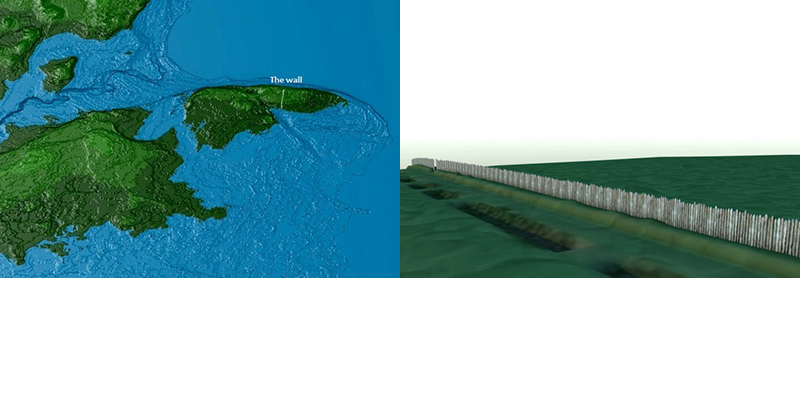 This project is investigating the variety of material expressions and monumentality of ceremonial sites in the East Polynesian area as well as variations of social complexity seen in ritual practices. It is an ongoing effort to create a comprehensive view of a widespread phenomenon and its variations.

It is carried out in collaboration with Helene Martinsson-Wallin. 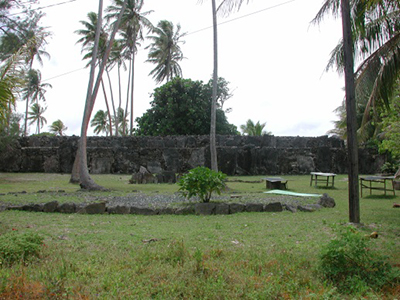 Over the past 30 years I have published and edited or co-edited 6 books on Pacific archaeology and been co-editor of one volume on the archaeology of Gotland Island. I have also been author or co-author of around 75 journal papers and book chapters and minor pieces, as well as about 20 excavation reports in archaeology/osteology, plus reviews and minor pieces. Major works are listed here together with a selection of recent papers.

2005. Paul Wallin and Reidar Solsvik. Radiocarbon Dates from Marae Structures in the District of Maeva, Huahine, Society Islands. Journal of the Polynesian Society. Vol. 114, No 4. pp. 375-384.

2006. Helene Martinsson-Wallin, Geoffrey Clark and Paul Wallin. Monuments and People: The Longevity of Monuments. The Past in the Present – A Report of the State of the Pulemelei Site, Savai’i, Samoa. The Journal of Samoan Studies. Volume 2. pp 57-63.

2010. Paul Wallin. In search for rituals and group dynamics: Correspondence analyses of Neolithic grave fields on the island of Gotland in the Baltic Sea. Ljubljana University. Dokumenta Praehistorica.XXXVII:65-75.2010.

2010. Helene Martinsson-Wallin and Paul Wallin. The story of the only (?) Megalith Grave on Gotland Island in the Baltic Sea. Dokumenta Praehistorica XXXVII:77-84. Ljubljana University.

2010. Paul Wallin and Reidar Solsvik. Marae Reflections: On the Evolution of Stratified Chiefdoms in the Society Islands. Archaeol. Oceania 43: 86-93. University of Sydney.

2011. Paul Wallin and Helene Martinsson-Wallin Monumental structures and the spirit of the chiefly actions. Time & Mind: The Journal of Archaeology, Consciousness and Culture Vol. 4 (1):43-58.  Berg.

2014. Paul Wallin. Chiefs, fashion and zeitgeist: Exclusion as an expansion strategy in the Society Islands. In: Monuments and People in the Pacific Region. Ed. Helene Martinsson-Wallin & Timothy Tomas. Uppsala University, Studies in Global Archaeology no. 20: 297-316.

2016. Paul Wallin. The Use and Organisation of a Middle-Neolithic Pitted Ware coastal site on the Island of Gotland in the Baltic Sea. Seances de la Societe Prehistorique Francaise 6:409-425.

2011. Paul Wallin and Reidar Solsvik. The place of the land and the seat of the ancestors: Temporal and geographical emergence of the Classic East Polynesian marae complex. In: Identity Matters: Movement and Place. Eds I. Hoem and R. Solsvik. The Kon-Tiki Museum Occasional Papers Vol. 12:79-107.